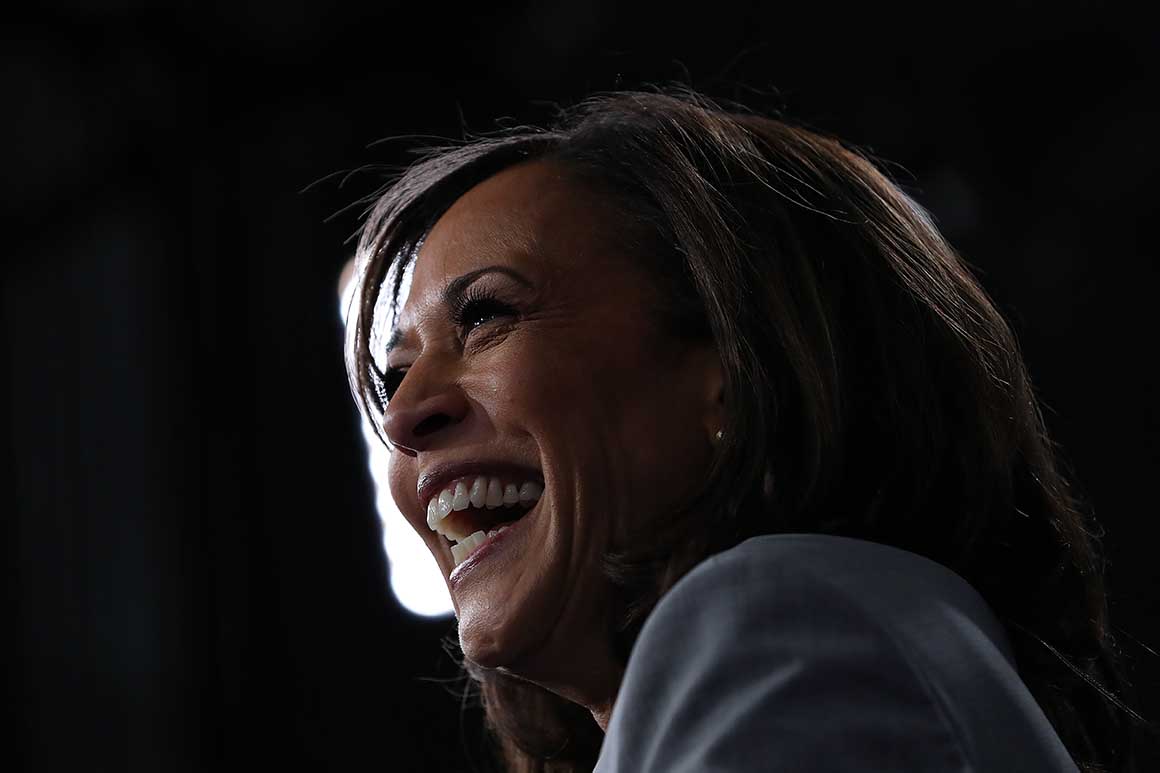 In her own tweet, Harris called joining Biden’s ticket an honor.

Biden, she wrote, “can unify the American people because he’s spent his life fighting for us. And as president, he’ll build an America that lives up to our ideals. I’m honored to join him as our party’s nominee for Vice President, and do what it takes to make him our Commander-in-Chief.”

Harris will be the first woman, the first Asian American and the first Black vice president if elected. And Biden’s barrier-breaking pick of her comes at a time of racial reckoning in the country, plunging one of the best-known women of color in politics into a contest against President Donald Trump, who has stoked racial divisions in the White House and on the campaign trail.

Biden prioritized choosing a running mate with whom he was “simpatico,” as he frequently said, and his months-long search narrowed the list to a handful of women the campaign believed could help energize Democrats in the homestretch of the campaign. In Harris, Biden is hoping to combine both of his priorities, finding a thrilling campaigner as well as a long-term governing partner.

Harris, 55, has also built a personal rapport with Biden, and she was close with his late son, Beau, a fellow former state attorney general. But Harris had to survive concerns inside the Biden campaign about whether she could be a trusted partner in the job, after a bitter primary clash and a searing debate broadside by Harris strained relationships between their allies.

Biden nodded at Harris’ relationship with his son in announcing his selection Tuesday.

“I watched as they took on the big banks, lifted up working people, and protected women and kids from abuse,” he said of the pair. “I was proud then, and I’m proud now to have her as my partner in this campaign.”

Biden “nailed the decision” for running mate in picking Harris, former President Barack Obama said in a statement, calling the selection of a vice presidential nominee “the first important decision a president makes.”

By choosing Senator Kamala Harris as America’s next vice president,” Obama added, Biden “has underscored his own judgment and character. Reality shows us that these attributes are not optional in a president.”

Harris has also faced persistent criticism for her prosecutorial record, including concerns she was too cautious to lead on sweeping changes. Her embrace in recent years of far-reaching changes has won over some skeptics, and she helped steer Democratic efforts to pass police reform this summer. A child of the Civil Rights Movement, whose parents were active in 1960s marches, Harris joined Black Lives Matter demonstrations this summer.

In the Senate, Harris’ must-see cross-examinations of Republican witnesses in hearings helped elevate her national profile. She was considered a top-tier presidential contender when she launched her campaign last year before more than 22,000 people in her hometown of Oakland. But even as she displayed flashes of brilliance as a candidate — including the clash with Biden in the Miami debate, which temporarily boosted her in polls and helped her raise millions of dollars — Harris struggled with consistency and see-sawed between health care policies.

Harris’ campaign unraveled under the weight of a confusing message and an unclear chain of command atop her staff, ending in mutiny amid late-fall layoffs. She flatlined into the low-single before dropping out before the Iowa caucuses.

The Trump campaign wasted no time knocking her as “phony Kamala” and casting Harris as a liberal Trojan horse taking advantage of an aging candidate in a statement and digital ad released on the president’s Twitter feed shortly after the news became public.

Harris, the ad says, attacked Biden “for racist policies” during her White House bid while “rushing to the radical left.”

“Voters rejected Harris, they smartly spotted a phony,” it continues. “But not Joe Biden — he’s not that smart.”

The ad notes that Biden has often referred to himself as a “transition candidate,” and contends that he is merely “handing over the reins to Kamala while they jointly embrace the radical left.”

Harris’ 2020 presidential run was the first time she had lost a campaign, after a rapid rise through California. A former line prosecutor who got her start in Alameda County — the same office where former Supreme Court Chief Justice Earl Warren once presided — Harris launched her first political run in 2003, for San Francisco district attorney, as a decided longshot. Harris ultimately defeated the incumbent after accusing him of running a dysfunctional office and not addressing rising crime rates.

While Harris cultivated the Bay Area’s wealthy and connected, she also campaigned with an ironing board, passing out leaflets at transit stops and blocking out her weekends to appear at clubs and churches in the famously left-wing city, where politics has been compared to bloodsport. Others have emerged nationally from this crucible, among them House Speaker Nancy Pelosi and Sen. Dianne Feinstein, who became mayor of the city after the assassination of George Moscone and Harvey Milk. But none have reached the heights Harris is now touching, or risen as quickly.

Six years after the district attorney’s race, Harris was again seen as an underdog in her campaign for state attorney general. Up against a popular district attorney from Los Angeles, Republican Steve Cooley, Harris’ was seen even by some in her own party as unelectable, as an anti-death penalty woman of color from San Francisco — a dismissal that Harris has since worn as a badge of pride.

Harris narrowly won the race, before building her political cachet to the point that she drew a nominal challenge for reelection in 2014 and cruised to an open Senate seat in 2016, becoming the first Indian American and only the second Black female senator.

As Harris celebrated her election to the Senate, Trump’s victory in the race for president loomed over her victory speech — and ushered in the next phase of her career, which now has her months away from potentially moving into a White House office alongside Biden.

Harris won praise Tuesday from other contenders for the vice presidency who did not get selected by Biden.

“Senator Harris is a tenacious and trailblazing leader who will make a great partner on the campaign trail. I am confident that Biden-Harris will prove to be a winning ticket,” said Susan Rice, who was Obama’s national security adviser and was among Harris’ competition to be Biden’s running mate.

“Her tenacious pursuit of justice and relentless advocacy for the people is what is needed right now,” Bass said in a tweet. “I worked closely with her when I was in Sacramento and she was the District Attorney in San Francisco.”

And former President Bill Clinton called Harris a “terrific” pick, while Hillary Clinton, the former secretary of state and 2016 Democratic nominee for president, tweeted that Harris “already proven herself to be an incredible public servant and leader. And I know she’ll be a strong partner to @JoeBiden. Please join me in having her back and getting her elected.”

Race Matters: “Can I End This Friendship?”

Have a Cozy Weekend. | A Cup of Jo

Ben Carson Is Running for President

The Pandemic is the End of Trumpism

ABOUT US
Newspaper is your news, entertainment, music fashion website. We provide you with the latest news and videos straight from the entertainment industry.
Contact us: contact@yoursite.com
FOLLOW US
© Newspaper WordPress Theme by TagDiv
Translate »